“MECE,” pronounced “me see,” an acronym for “mutually exclusive and collectively exhaustive,” is a popular mantra at McKinsey. If you manage to get a position at McKinsey, or at any other MBB for that matter, you are likely to have to handle huge amounts of data. Chances are that your boss will ask you to ensure that you organize your data in an “MECE manner.” “Be more ‘MECE’ in your approach,” she might say. In fact, even at your case interview, you likely used the MECE principle. You might not have got the green signal if you hadn’t.

MECE is a method of grouping information into elements that are mutually exclusive (ME) and collectively exhaustive (CE). In other words, it is a process by which information—ideas, topics, issues, solutions—is arranged or, put in “MECE buckets,” with no overlapping between buckets and with each item having a place in one bucket only (ME), and with the buckets including all possible items relevant to the context.

How is it used?

Strategy consultants use the MECE framework (Issue Tree, Decision Tree, Hypothesis Tree) to segregate a client’s problems into logical data categories that can be analyzed systematically and minutely by their staff involved with the project. The framework is notably used at McKinsey, where data from clients’ businesses is organized on the basis of MECE. Well-known frameworks, such as Cost-Benefit Analysis, 4Cs, and Porter’s Five Forces have the MECE principle at their core.

How is the MECE framework used to solve clients’ issues at consultancies? One method consultants use is to create an “issue tree” to arrange all the information that they have and divide this information into all possible issues and sub-issues.

An issue tree is particularly helpful for solving large and complex problems as it facilitates splitting them up into smaller, solvable problems. “Issue trees” get their names from their structure—narrow at the top with the problem statement, and wider towards the bottom, even as each level accommodates more specific sub-issues or smaller problems. However, some “trees” are also created left to write, but the principle remains the same.

On the third level, the issue tree would tackle the question “How to Increase the number of orders?” One way to increase orders would be to shift the restaurant to a busier area and another would be to launch a marketing campaign so that the restaurant becomes more widely known. On the other main branch, under “reduce salary expenditure,” options such as “fire redundant workers” could be mentioned, as also “shift to a less expensive locality” under “reduce rental”, and “change the vendors,” under “reduce raw material expenses.”

How does an issue tree help? It enables consultants to consider all options separately and exclusively and suggest the best option to the client. It helps create a common understanding among team members about the problem-solving framework and focus team efforts. It smoothens work distribution among team members.

Often, consultants who create an issue tree may need to “trim branches,” which means doing away with options that are not worth pursuing after a detailed initial consideration. In the example of the issue tree, given above, about how to increase the profitability of a restaurant, increasing prices may not be an option for various reasons, and that “branch” of the issue tree may be left out or “trimmed.”

For illustrating the concept here, a simple example has been given. In real-world contexts, the problems may be much more complex. The suggested solutions would have to be backed by hard data so that they are logical and can be proven to be such. 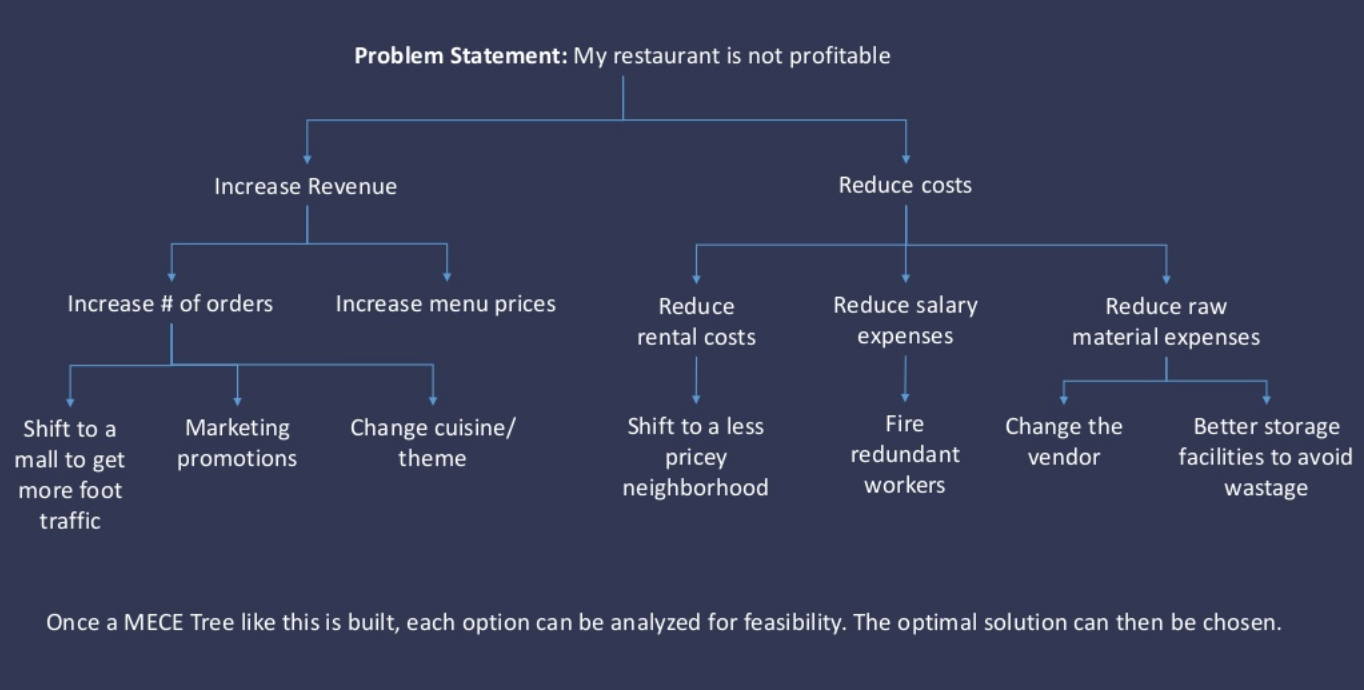 A decision tree is a tree-shaped graphical representation of decisions and potential outcomes of those decisions, and is used to determine a course of action. A decision tree helps users understand the comparative advantages and disadvantages of each decision and outcome.

A decision tree is often drawn from left to right. It starts with a specific decision denoted by a small square. “Branches,” or lines, are drawn to the right from the square, representing each potential option. If the option is a new decision, a square is drawn, and from it, new branches are drawn, representing new options. At the end of each branch, a circle is drawn if the result of the option is unclear. If the option leads to a decision that helps bring about a solution, the branch is left blank. A triangle is also used to signify the end of a branch or path to a potential solution.

Like an issue tree, a decision tree is exhaustive in its inclusion of decision, outcomes, options, and scenarios. A user of a decision tree looks at each of them and chooses the best option. 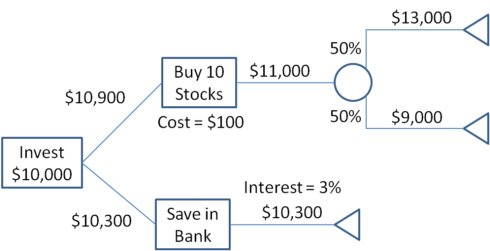 For example, take the problem, “Pioneer Bank wants to increase the productivity of its sales.” The first two main hypotheses would be “Hypothesis 1: Pioneer can increase selling time from the total available time” and “Hypothesis 2: Pioneer can increase sales volume using the available selling time.” The sub-hypotheses under Hypothesis 1 would be “Reduce or outsource non-value added tasks” and the sub-hypotheses under Hypothesis 2 would be “Increase the number of sales leads” and “Convert more sales leads to sales.” 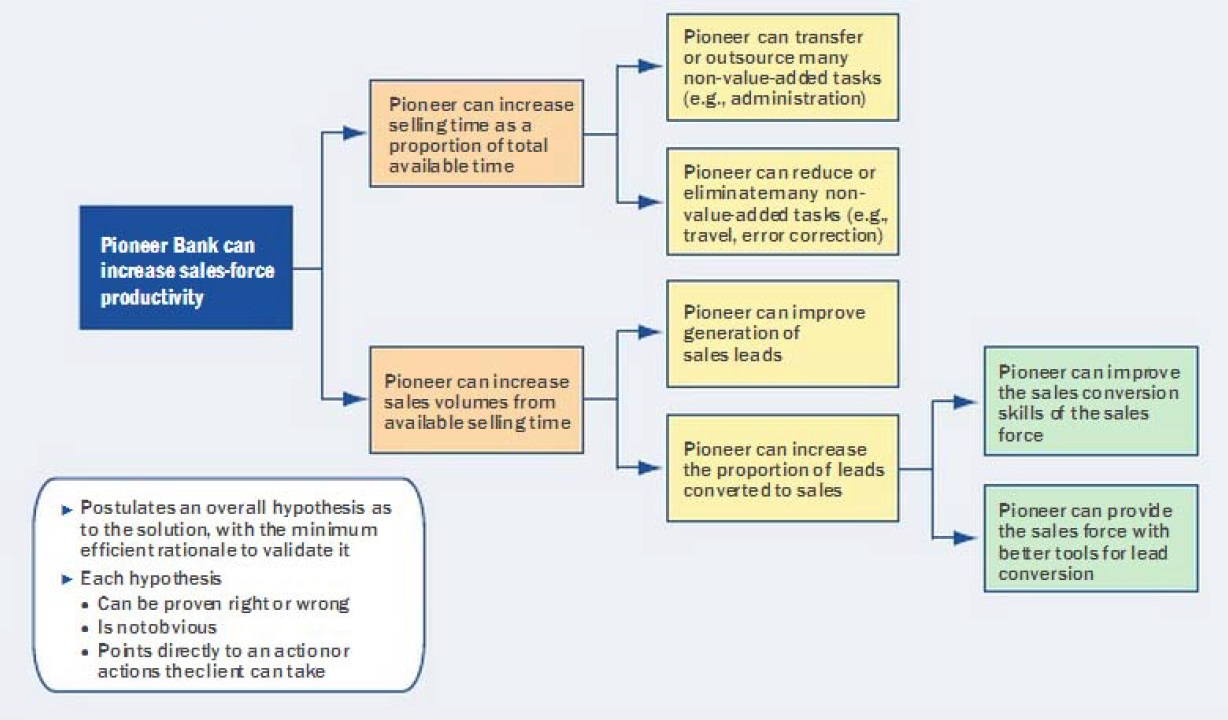 First, understand the problem thoroughly. What are you trying to solve?

Second, write down the problem statement. Take care to ensure clarity in the statement so that there is no ambiguity.

Fourth, consider each option individually. Consider the pros and cons. Leave out those that are illogical and include any new insight as an option as you understand the problem better.

Fifth, select the best option and present it to the client.

Good management consultants use the MECE structure for problem-solving. A piece of advice they like to give to aspiring consultants is to learn to use the MECE principle for not only structuring problems but also communicating solutions, whether they are attending a case interview at MBB or sitting across the desk from a client.

Creating a MECE hypothesis helps clarifies a problem. It’s like having a road map when you are lost in unknown territory. If your approach to structuring a problem is “not MECE,” “it is probably messy,” as they say.