The Indian School of Business (ISB) is a prodigious brainchild of two extremely enterprising McKinsey & Company senior executives, Rajat Gupta and Anil Kumar. Founded in 1996, this business school is still very much in its diaper years when compared to MBA powerhouses like the Harvards of the western world. However, its relative infancy never really translated into unsure first steps, considering the fact that it took merely 12 years for it to place 20th in the Financial Times’ Global MBA Rankings in 2008.

Since then, it has been happily meandering around in the neighborhood of the 20th place, wandering into the 12th, 15th, to the latest 33rd, 29th, and 27th place in the last three years (counting back from 2017).

With the support of the Telangana and Punjab state governments, the school has managed to establish two sprawling campuses in Mohali and Hyderabad, with a great emphasis to its one school, two-campus slogan. As in both campuses share the same resources, placement services, and faculty – in collaboration with international business schools like the Wharton, Kellogg, and the London School of Business – to create an excellent premier institute strategically placed in Asia.

Though it doesn’t have an AICTE (All India Council of Technical Education) accreditation approved by the Indian government, mostly to maintain its self-interest of practicing an independent dynamic curriculum keeping up with current business trends, it does have an AACSB (Association to Advance Collegiate Schools of Business) accreditation.

Having sung the ISB praise song set to the tune of We are the Champions, it is now time to indulge in its ROI. With tuitions ranging in the above 30 lakhs INR, or near $47,000 price tag, it is not an unnatural question to cross ones’ mind.

Can they put their money where their mouth, or rather, there placement is? What are the ISB placement statistics, over the years, like?
Which companies sign up as recruiters for campus placements?
How many students manage to secure an offer? What kind of an offer – Industry, Position, Salary?
What is the placement process like – draining or fulfilling?
And what is the perception, at large, to incite such a massive (as it is for most Indians) financial commitment?

Let’s explore as much as we can.

The strength of an MBA program lies in the demand of its graduates, and how well its alumni have adjusted in the professional realm. The data compiled here is based on employment reports published each year by ISB, LinkedIn, and alumni surveys profiled by Financial Times. Download the ISB placement report here. We have collated a few parameters below for a quick overview of life after an ISB MBA.

Government think tanks, the who’s who of the corporate world, and public sector alike, have signed up each year to check out the newest stars of business, molded in the ISB brand. Compared to an average class size of 200-300, for other well-known b-schools, ISB usually offers up close to a thousand new graduates to potential recruiters.

While this might be a good thing for booming economies, it usually sparks the question of employability of those fresh graduates, in an otherwise dim to lowly-lit average market. ISB, however, attracts some real corporate heavyweights and manages to place nearly everyone in its vast student body. In 2017, there were 411 companies that participated in their placement process. Some of the known names are listed below.

The above table only gives a glimpse of an ever-growing volume of employment pool, with a 33% increase in their number since 2011. Most companies offer multiple positions. For instance, in 2017, the 411 companies offered a total of 1,113 positions surpassing the nearly 900 candidates who appeared at the recruitment drive set up at ISB. Just as the number of recruiting companies, the number of offers have also seen a jump of nearly 68% since 2011, with a 6% hike in the number of offers per student, with nearly 1.3 jobs per student in 2017.

According to a survey conducted by Financial Times on ISB graduates from 2013, about 35% (majority) of graduates placed in companies employing greater than 50K employees, 22% in companies sized between 5K-50K, 18% between 500-5K, and the rest 25% in smaller companies with less than 500 staff members.

According to LinkedIn ISB alumni profiles, all of the 18K+ past graduates are employed well, with over 300 at Amazon, over 250 at EY, nearly 250 at Accenture, and so on with regressive, but nevertheless, impressive large numbers. As far as their global international reach is concerned, the largest slice of the ISB pie is reserved for Indian employers at 14K+.

Over 1,500 are in the US, and other substantial presence is sprinkled all over Europe and the Middle East. 2017, however, was a lackluster year for international offers, as compared to its previous years. 32% placements were international back in 2013. Since that year, there has been an 81% drop to only 12 foreign offers, as of 2017.Tough times or Trump times…take your pick.

Below are captures of the Industry and Functional placements of ISB graduates in 2017. Most candidates got offers in the Consulting, IT, and IT services industry, trailed far back by Retail, e-Commerce, and the Financial industry. Functional roles, of newly employed graduates, involved Consulting, Sales & Marketing, and General Management. 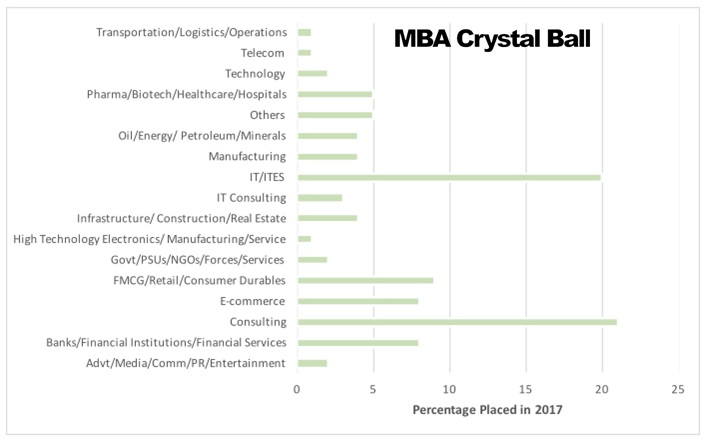 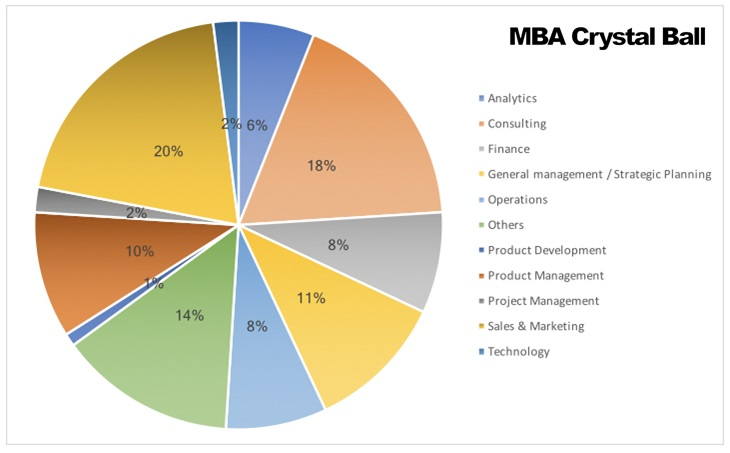 As per a class survey by Financial Times, in 2013, the largest faction of ISB alumni continued in Consulting after three years of employment, followed by e-Commerce and the IT sector. Job titles, for a majority, after the same three-year post-ISB work experience, garnered them a Senior Manager/Executive title, followed by various Department heads.

Among the many good things, that Financial Times has to say about ISB, the most remarkable is the salary change with an MBA from either of their two campuses – a whopping 160%. All, or more accurately 99%, students claimed to be employed within three months of job search, including the in-house placement process, which we will talk about in some detail below. The weighted salary, for 2017, was about $145K.

According to the employment report, released by the Career Advancement Services (CAS) at ISB, the compensation range for 80% of the graduating students, from 2016, fell within INR 11 lakhs to INR 72 lakhs. In dollar speak, some of the offers translate to an impressive figure, even by the western standards of starting salary packages, at over $100K.

The placement process, at ISB, is elaborate, intensive, and designed to include every student. No men (or women) left behind, as soldiers say at wars. The preparation takes place at both ends, students and recruiters. The whole event is managed by the CAS team run by ISB and the Career Advancement Council (CAC) run by students. We will list out the outline of the process based on an ISB insider’s perspective.

The above parallel processing culminates into interview sessions named Day 0, Day 0.5, and Day 1, spanning the first week of December to the first week of January. Some companies, especially international companies with less flexible dates, may conduct interviews even before Day 0, however, the first offers are only made after Day 0. Every student is entitled to accept only one offer. Students are often flown between the two campuses to ensure a maximum, and comprehensive, recruiter exposure.

What may seem like a rather long drawn, and nail biting, procedure, remarkably transforms into often multiple offers for nearly all the graduating students.

Here is a somewhat more detailed version of the above summarized process, for the eager reader – ISB Mohali Campus Placements.

All’s well that ends well. However, there is a large mass of industry population who believe that ISB placements cannot be compared to other famous business schools in the country. And there is good reason for that. Most IIMs have programs that engage fresh out of college graduates, seeking an MBA to enhance their business profile. With ISB, however, the candidates usually have upwards of 4-5 years of work experience.

Recruiters are attracted to the fact that ISB offers them a rather large pond with many fishes, all from various backgrounds and expertize. However, reviewers claim that rarely do those candidates manage to change gears between industries. Candidates are often offered similar job roles, or slightly improved job roles in the same industry. In that sense, they feel, the hefty tuition does a disservice.

But there is yet another faction of outsiders who believe that this school offers something truly unique in the Indian framework. The classes are as diverse as they can get unlike the usual run-of-the-mill recent engineers that flock the IIMs or other b-schools. The international collaboration and exposure to their esteemed faculty body provides an enriching environment.

ISB also has influential CXO position alumni, spread across the globe, who are often active participants in the rearing of these future business leaders. And any international school, with the same facilities, are naturally far more expensive when living, and travel, costs are included.

Skeptics do make a point though. With 68% job placements in India, sometimes the ROI does get clouded for students who don’t manage to make a massive leap in their career, after an MBA. The situation ultimately boils down to motivation, direction, and having the right reasons to pursue an MBA in the first place.

So, here are a few helpful reads to guide you towards the light.

As parting words of unsolicited wisdom – Research your requirements and look before you leap!

MBA Crystal Ball has some of the best admission consultants for ISB. Reach out if you need help. Our email is: info [at] mbacrystalball [dot] com