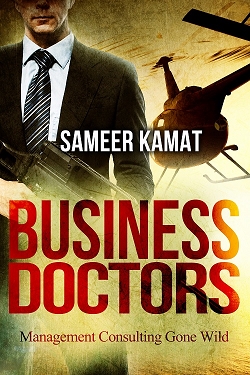 Business ethics has been getting a lot of coverage in the media. All the corporate crimes, that involve a host of stakeholders from promoters to middlemen and often government officials as well, invariably bring up the role played by professional ethics in modern day business.
Management Consultant Michael Schneider, the protagonist of ‘Business Doctors – Management Consulting Gone Wild‘, who is hired by the underworld might’ve faced an unusual form of an ethical dilemma that most regular professionals would (thankfully) never face.
In the real world, questions related to business ethics will come up in more subtle forms. This will get more frequent as you gain more experience and rise through the ranks to take up decision making responsibilities.
Our guest blogger Rohit Gupta shares his views on the topic of Business Ethics, shares examples of ethical malpractices that gained notoriety and also questions whether an MBA classroom is the best place to learn about professional ethics.

‘Business Ethics’ may seem to be business jargon in this age of conglomerates, but owing to its origin in the trust factor (it being a common focal point through which two trading entities can converge for a business transaction) it is important enough to study and understand.

Just like an individuals’ ethics determine his/her definition of right and wrong, an organization’s ethics will decide its definition of right and wrong and the boundaries which it is willing to cross for making those big bucks (The Wolf of Wall Street is a good example, where business ethics unfortunately existed just on paper). It includes but is not limited to bribery, insider trading, corporate governance, hiring policies, tax evasion etc.

High adherence to business ethics signal transparency, which is a prerequisite in this age of openness and data proliferation. They are generally framed as a basic framework to cultivate a positive culture within the organization and to exude trust-worthiness to the stakeholders, but certain aspects of it can and should be enforced by law.

Rest assured, it can shatter an organization’s image into a thousand pieces in this age of quick sharing and raving critics on social media.

Like almost all the things, the purview of ethics has shifted and changed with time, as we know that there was a business transaction involved even with slavery and colonialism and there was a certain set of ethics followed, which in fact are so dated now that they will seem outrageous to the 21st century business student.

Hence, it is in the best interest of the organization to be nimble and formulate policies which are in line with what is expected of a business, in the current times. With growing environmental awareness (Mother Nature takes a back seat, unfortunately, whenever bottom line is concerned), having sustainable business policies to take care of the environment is a must, which would have been unthinkable a century ago.

There is a general misconception that business ethics and profitability cannot go hand-in-hand. And there is no definite answer to this, but it all boils down to the long-term outlook of the organization. If it is looking to make a quick buck, it can have short-term gains at the expense of its ever diminishing credibility.

But a business in there for the long run cannot even afford to compromise its credibility; it will be akin to “pinching pennies to piss away dollars“.

Economist Milton Friedman deconstructs the problem in a lucid yet controversial way, “corporate executives’ responsibility… generally will be to make as much money as possible while conforming to their basic rules of the society, both those embodied in law and those embodied in ethical custom“.

Examples where business ethics were compromised

Lehman Brothers bankruptcy was a result of bad regulatory policies, a lack of transparency and lousy business ethics in general which led to huge losses for all the stakeholders involved. It employed balance sheet tricks (temporarily shipped assets to London during a difficult stretch to make loans appear like revenue), while unfortunately nobody questioned their ways when the economy was booming.

Rajat Gupta, the former Managing Director of McKinsey & Company was convicted in 2012; was sentenced two years in prison and ordered to pay $5 million in fines on insider trading charges. He also served as corporate chairman, board director or strategic advisor to Goldman Sachs, Procter and Gamble and American Airlines.

In 2008, the investing mogul Warren Buffet agreed to pay $5 billion to Goldman Sachs in exchange for preferred shares, a news which would have raised the price of the stock and which was not to be made public until the end of day. Mr. Gupta tipped his longtime friend, and the next day the friend made $1.2 million in profits from the shares (while you were probably sitting in your cubicle/classroom trying to work hard).

The US Securities and Exchange commission estimated that the tip leaked by Rajat Gupta generated profits and avoided losses of more than $23 million. Our homegrown Indian firm Satyam Computers was also not able to keep up with the business ethics syllabus as Mr. Raju decided to cook the balance sheet to inflate operating profits and preferred short-term gains while cheating shareholders and investors.

To ascertain where business ethics end and laws start is fairly difficult, because history is a testimony to the fact that crime always precedes the law. So, can professional ethics be called ‘ethics’ when they need to be enforced by law?

Business Ethics and the MBA

The business leaders of the next generation have the collective responsibility of upholding business ethics to ensure transparency, lower the risk of bankruptcy (no pun intended) and to make decisions keeping in mind a holistic and long-term view.

The ethics followed by any organization defines its various aspects; namely its impact on climate, the actual efficiency of corporate social responsibility programs, view on sustainability etc. Business ethics deserve to be a core component of the MBA curricula, and not just an elective satellite part.

But teaching ethics to 25-year-old students who have seen enough ups and downs in life to steer out any hopes of major epiphanies is a Herculean task in itself.

They need the ability to incorporate the social dimension in business problems with the right framework to make practical decisions when faced with ethical dilemmas. Professional ethics is not just business jargon anymore, it serves as a moral barometer for societies and corporations as a whole, and far more important, for all the future leaders.

Author Bio: I am Rohit, an engineer by education, a data analyst by profession and a reader by inclination. Since 2012, I’ve been writing about self-improvement, productivity, coping with life as it comes and just being plain happy. I blog at http://urbangallivant.wordpress.com/

MBA programs are in a tight spot when it comes to imparting business ethics training to future leaders. All the formal techniques may mean little for students who come in with their own set of value systems.
At best, MBA courses can make them aware of the various forms that they’d be exposed to business ethics (starting with anti-plagiarism statements that they need to sign). How they choose to behave once they graduate is a different story altogether.

Serious about higher education? Join us on social media for regular updates.

Beyond The MBA Hype

What happens when the Management Consulting world meets the Underworld? Read more

MBA MAP
What are your chances of getting into the best MBA programs? Also, find out how you can improve the odds. Read more

Take charge of your professional life. Find out what's holding you back and what you can do about it. Read more